At the start of October, the trade show FLORIAN 2021 opened its doors again in Dresden. There were countless new items for the emergency response professions which amazed the attendees. TEXPORT®‘s booth was an especially strong draw and that was entirely justified. Visitors were presented with nothing less than a unique innovation in this field not seen anywhere else in the world. And that’s exactly what we’re presenting all of you here, who could not be at the show in person.

We at BRANDHEISS highly value, among other things, having a real “hot” line to the protective clothing specialists at TEXPORT®. Every editor is pleased to have the privilege of getting first-hand information before everyone else. But we got our information about this report from the very first hand, that of the Salzburg-based leader in technology. Mr. Otmar Schneider, founder and chief executive officer of TEXPORT®, took time himself to explain to us the new Rescue Belt System RBS®. It is also no coincidence that Mr. Schneider quite obviously enjoyed the presentations himself. In any case, the vision for this project came from him personally and would not let go of him for more than four years.

Otmar Schneider and his team developed the RBS® for more than four years. The result is more safety with easier handling. 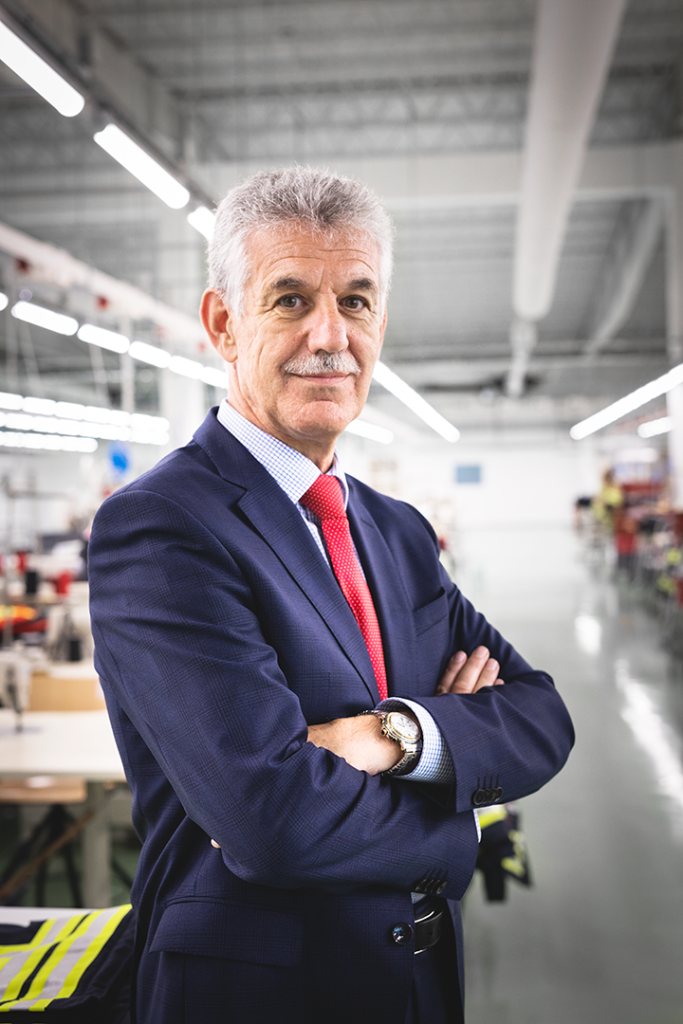 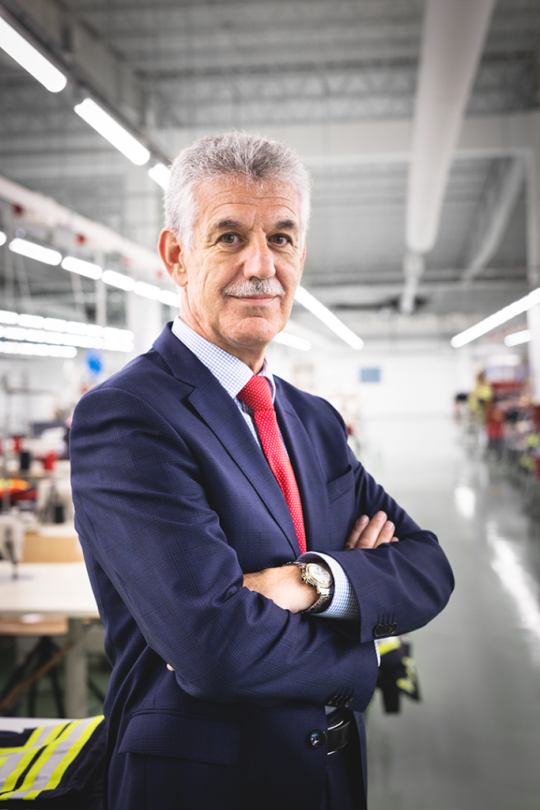 Unique in this form

In detail, Mr. Schneider was disturbed by things like the fact that breathing masks have massive problems with the systems that assume the connection point for the fall protection is always on the back. Or the condition that all systems are only put on as needed over the protective clothing. Here the belts are subjected to influences like heat, moisture, sharp corners or dirt. The loss of time when the safety belt is only put at the site of action, which in any case can almost always only be done as a pair, is just as disturbing. And that’s not even taking into account the danger of incorrect operation due to the stress level during the action, which also costs time. And a compatibility test to make sure that the protective qualities of the different safety systems are not mutually exclusive is no longer required with the RBS® 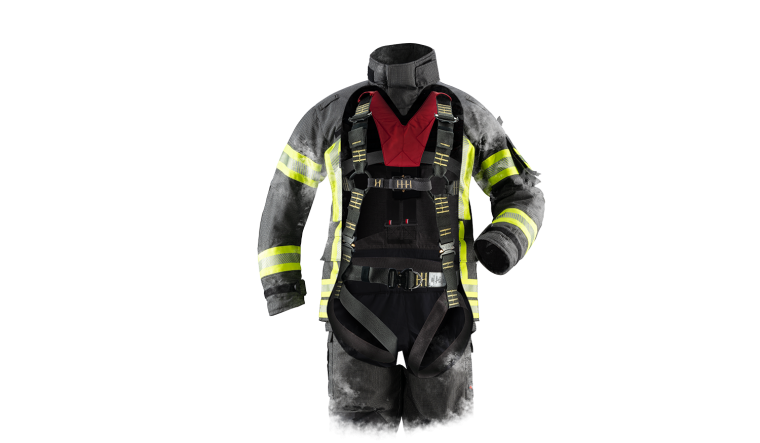 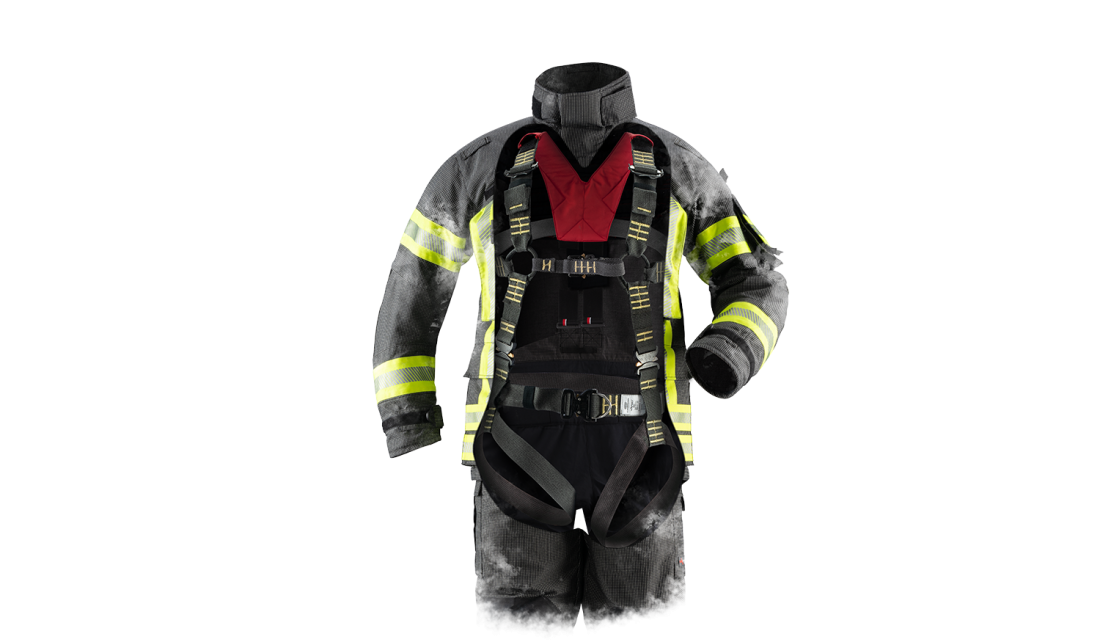 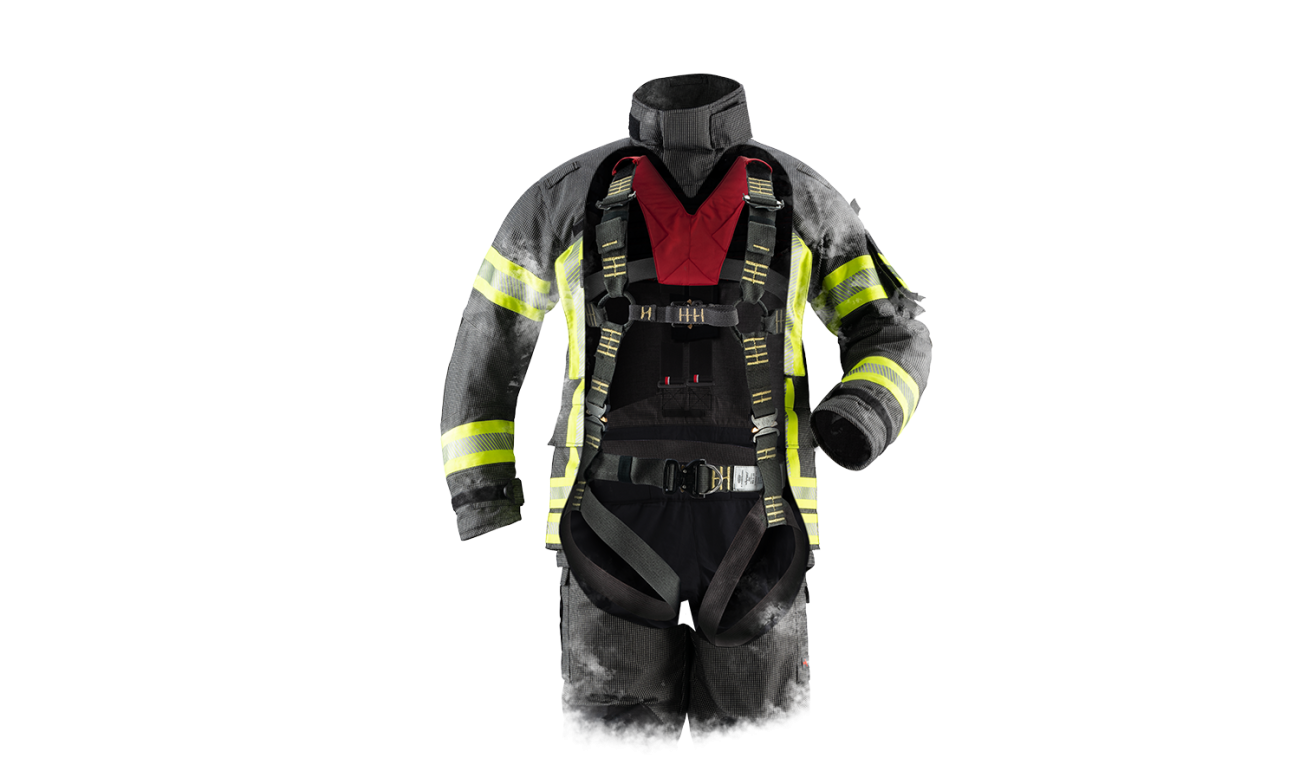 Ready-to-use when you arrive at the action site

In close cooperation with his technicians, material experts and the Haberkorn company, Mr. Schneider began to develop a belt system which is not worn over protective clothing, but with this system, is already connected into a closed unit before the protective suit is put on. It should be mentioned at this point that the handling of the RBS® can be viewed in a cinema-quality user video available for free on the website of TEXPORT®. This shows that RBS® is an ingenious piece of equipment precisely in the hectic phase of putting it on, because the lap belt is already attached to a pair of inner shorts at the waist of the pants by means of an all-around zipper on the waistband as well as being zipped into the internal lining of each pants leg. This solid connection of the lap belt to the inner pants, prevents with absolute reliability, that components of the belt could twist or slip when putting on the pants leg or when pulling the pants on. This means a perfect fit is always guaranteed. It also prevents the legs from getting twisted in the lap belt while putting it on, which is always bothersome.

The ends of the belt themselves are drawn through the straps of the pants and clicked onto the RBS®-chest strap. This is in turn hooked to the jacket and the belay hoop. In contrast with the systems previously distributed on the market, the connection point is in the centre of the chest and prevents the upper body from tilting backward in the case of a fall. In particular the respiratory masks in the RBS® do not have any interfering elements or interactions on the back. In practice, fire department personnel can prepare the protective clothing in the watch station in peace and with the necessary care and then arrive at the site of action already with a safety system that is 100 % ready-to use. At most two press locks with a carabiner for the belay loop still have to be put together before start of the deployment and the carabiner clicked in. For this purpose, the carabiner is already positioned in its own pocket in the jacket.

“Many years ago, I became concerned about the EN 361-compliant rescue and safety belts for fire department personnel available on the market. Said more precisely, I was just plain dissatisfied with what was available“, is how Mr. Schneider described the intellectual birth of RBS®. 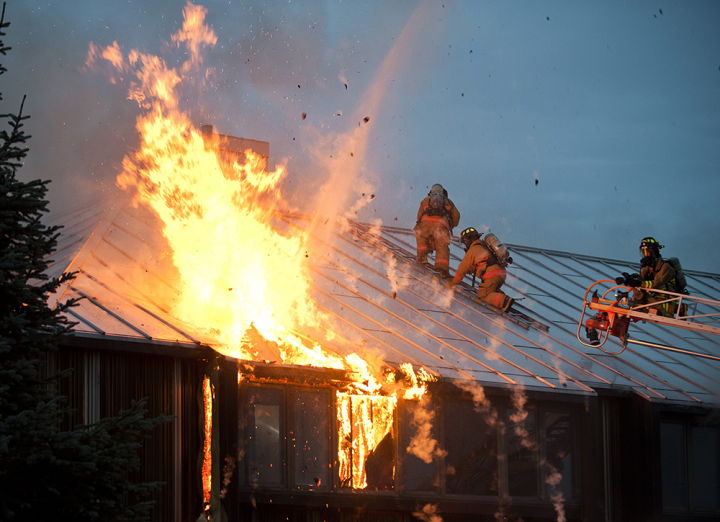 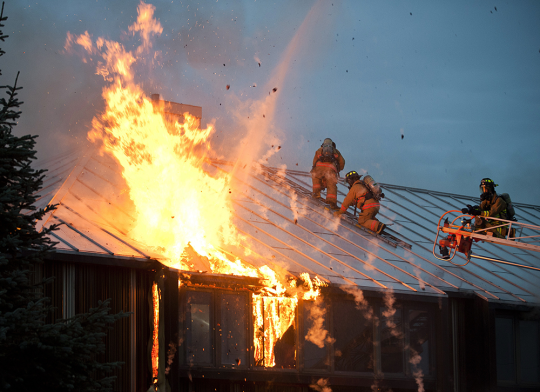 Professional and in-house factory fire brigades were decisively involved in the development.

That this system is so practical and easy to use is also thanks to the massive collaboration of professional and in-house factory fire brigades who were equipped with the prototypes of the rescue belt for two years. Countless suggestions and experiences borne of practical experience found their way into the development. It is precisely in the areas of comfort and fit where Mr. Schneider makes no compromises in new products – as he hasn’t for 30 years already. You should have seen him running around the main offices of the company in Salzburg wearing the Fire Survivor RBS® all day long. The plausible justification for this was provided by Mr. Schneider himself: “The safety and protective effects of our emergency services attire are well-assured by norms. The wear comfort and the fit however are subject to subjective perception. From the beginning I never made any compromises in these criteria, either. For this reason, I make sure first that I am persuaded of the comfort level of a new development, and only give it a green light if I feel comfortable in the protective attire. “

Since the demand on a belt system are a little different for each fire department, the RBS® can be modularly configured and/or expanded at a later point in time. This means only the lap belt including the inner pants (without chest strap) can be used by itself e.g. for stabilisation. In this case, the conventional suspenders are secured to the protective pants instead of the chest strap. However, if one expands the RBS® with the fire-resistant para-aramid chest strap in combination with the belay loop and the optional shock absorber, the system presents what is currently the best possible fall safety harness system. Also unique is the certification according to the Norms EN 469, EN 361, EN 358 and EN 813.

Two specially configured containers make it possible to try out the RBS® comprehensively and to experience all possible applications. 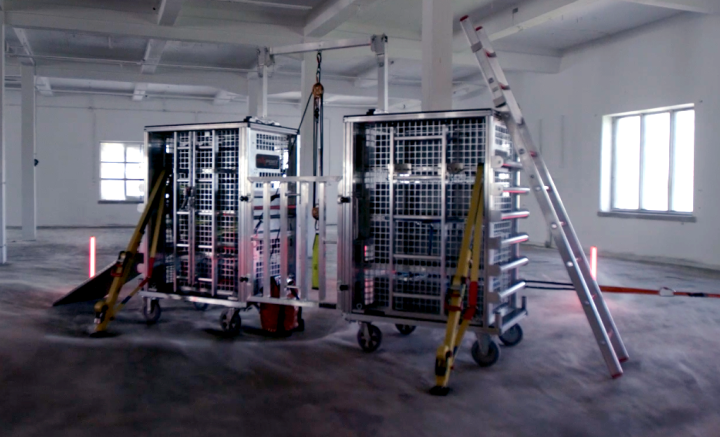 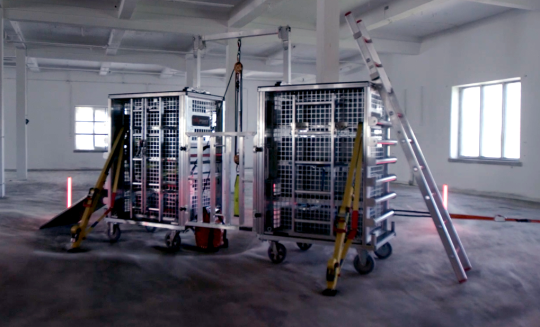 The TEXPORT® Rescue Belt System is an innovative and patented body harness system that is fully integrated into the protective clothing. The uniqueness lies in the combination of fulfilling standards EN 469, EN 361, EN 358 and EN 813 in a single protective suit. TEXPORT® thus creates a revolutionary safety concept that provides optimal protection to first responders – according to the motto “Protecting You”. 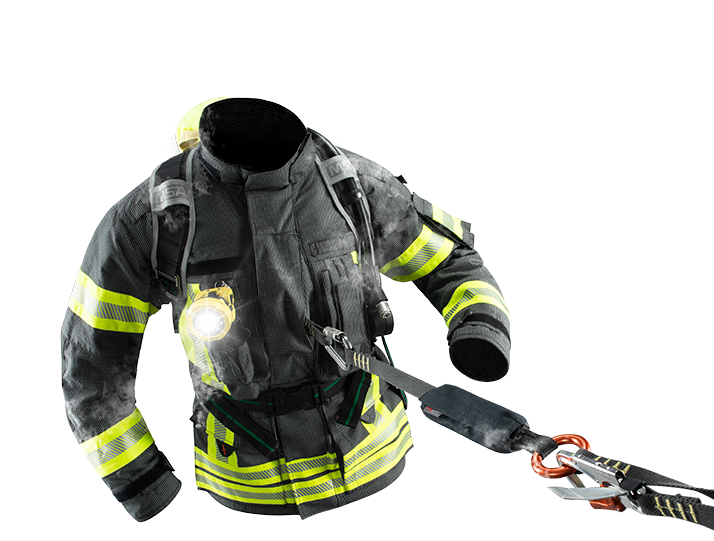 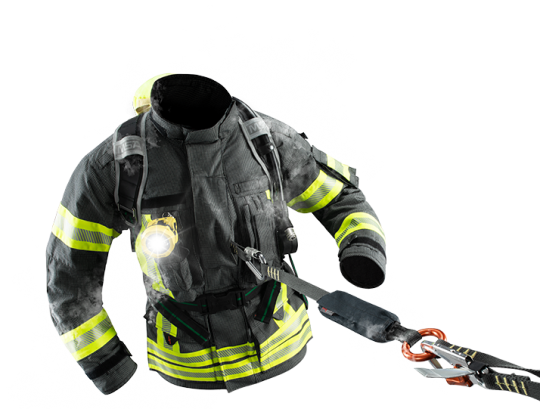 Welcome to our new website!
TEXPORT AND THE INTERSCHUTZ – A close connection